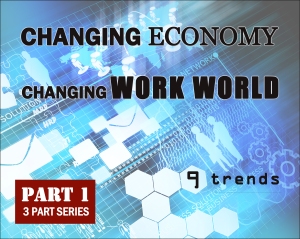 The economy is changing and so is the work world.

Knowing how the labour market is shifting can help you prepare for the future.

Some of the growing trends for the Canadian work world include an older, multi-generational, culturally diverse workforce with more female participation.

The pervasive use of evolving technology will continue to accelerate and jobs will remain fluid with fewer permanent full-time positions available.

1. Canadian Workers are Getting Older

Although a large portion of the demographic of Baby Boomers are not yet ready to retire, the numbers required to fill their positions will be significant. It is anticipated that a substantial number of newcomers, Millennials and the underrepresented workforce (aboriginals, people with disabilities and visible minorities) will be required to fill the labour force gap.

Each group, however, may continue to face challenges including irrelevant or lack of education, credential recognition, language barriers, discrimination and/or lack of Canadian/relevant experience.

For the 1st time in history four generations are working side-by-side:

Traditionalists: born prior to 1946

Each generation has a distinct approach to work and communication and is very different in terms of attitudes, beliefs, values and behaviours.

Millennials are truly the 1st generation who have been raised as children of the “Information Age” – they have never known an existence outside of technology and are accustomed to being perpetually “connected”. The Traditionalist experience has been quite the opposite.

This unprecedented phenomenon of a four-tiered multi-generational workforce could create difficulties for employers who fail to effectively integrate the team. Differences in perspective and communication may result in long-term problems including conflict and misunderstanding.

For employers and workers who are able to see the benefits, the collision of generations presents a distinctive opportunity to collaborate and prepare for future succession which could give businesses a competitive edge.

Since the mid 1970’s, there has been a great deal of growth in terms of female participation in the Canadian labour force. Progressively, women continue to play a critical role in Canada’s Labour Market.

In 1976, 47% of women aged 20-64 participated in the workforce. Today, that percentage has risen to 76%. Women currently make up more than 50% of the labour force and have much lower unemployment rates in some provinces.

Although women are increasingly taking on leadership roles, many with post-secondary education, the income disparity remains significantly lower than that of their male counterparts. Women also continue to face difficulty in penetrating the top ranking roles among corporations. Unfortunately, the income gap widens for those who are visible minorities or live with a disability.

Recently (April 8, 2014), the Honourable Kevin Flynn, Minister of Labour and the Honourable Teresa Piruzza, Minister Responsible for Women’s Issues on Equal Pay Day made a statement in the House of Commons in relation to equitable pay for women.

They recognized the contributions made by women in the Labour Market and have asked Ontarians to “recommit themselves to closing the gender wage gap so we can achieve fairness in pay.” Roundtable discussions will be held to discuss ways to close gender wage gap in Ontario.

Read the 2nd part to our 3 part series here.